Adapting isn’t always easy but became a way of life for Desiree Antle, Team Lead at the 12th street Residential House for TECH. As staff and those served by the agency started to realize the grim reality of COVID and how it would impact day to day activities, Desiree and others in the house had to quickly learn to adapt to the ever changing world around them.

“It was a struggle to explain to the people we serve what was going on. They had a hard time understanding that we were taking precautions and staying in for their safety, not to limit them,” says Antle. When COVID hit in early 2020, the leadership at TECH worked fast and furious to develop a plan to keep both the people served by TECH and staff safe. One of the first steps in the plan was to have residential housing ‘shelter in place’ in an effort to limit exposure. 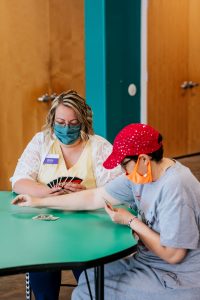 Antle, who was promoted to a Team Leader mid-pandemic, focused on following TECH protocols to keep everyone safe. This included wearing masks, using hand sanitizer, and checking temperatures regularly.

“I have a son who has an immune deficiency disorder, and I was working with staff and people we serve who had COVID. I didn’t want to take COVID home to him so I’m grateful that the protocol such as wearing masks worked,” says Antle.

While Desiree’s house had people served contract COVID, they looked at ways they could limit the spread. “We were able to keep two people from getting sick by making changes to how we had our meals,” says Antle. What may seem like a small change to anyone from the outside looking in, made all the difference in the world for residents at the 12th Street House. “Everyone ate breakfast as they woke up in the morning but during lunch and dinner, we spaced clients out, sanitized, and set up additional seating areas.”

“I’m really proud of how the clients handled the challenges that we were faced with.”

When people in the house found themselves frustrated with being cooped up, Antle got creative! They played cornhole, found activities to do outside, and played ‘Garbage’ – a card game that was not only highly entertaining for the group but also helped with cognitive skills. They also called on help from the Adult Life Skills team who were doing some adapting of their own.

The ALS program traditionally is a day service program that people served would attend daily and return home in the afternoon. As part of the shutdown, the ALS program was closed and TECH worked furiously to figure out ways to utilize the ALS and continue providing some of the same services, just delivering in a different manner. “The ALS was awesome,” says Desiree. “They came to the house and jumped right in, bringing games, putting together fun parties, taking folks for bus drives and helping to get us out of the house, in a safe manner, as much as possible. We celebrated Christmas and Birthdays every chance we had. This helped keep the spirits up!”

While adapting was challenging at times, Desiree was quick to reflect on the growth she witnessed in the last year. “The teamwork between staff at the ALS and our house is something I’m really proud of.

We didn’t really have a lot of interaction before, but they were there to help and spend time in our house. They jumped right in, even helping with laundry,” jokes Antle. “I’m really proud of how the clients handled the challenges that we were faced with. Even though they were frustrated at times, they each have grown immensely from this experience.” She went on to say, “It’s been a long year. I can’t believe it has only been a year – it seems like a lot longer. I never thought I would say I had fun during COVID, but I really did.”

Looking Back On A Remarkable Career

Setting Our People Up For Success

Making A Difference In The World